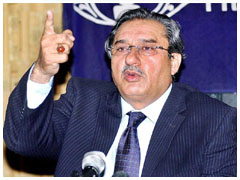 Spokesman for Sindh Education Minister Pir Mazharul Haq rejected some media reports claiming preparations of direct recruitment on 540 non-teaching vacancies in 14 colleges of the province. In a statement, the spokesman clarified that all vacancies would be advertised in newspapers prior to recruitment. He said no appointment would be made in defiance of legal procedure. Education department and Director Colleges Sindh Nasir Ansar had already been directed to ensure following of rules in the recruitment process, he added.