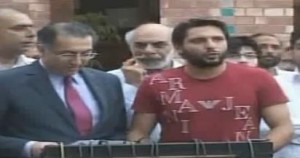 Thursday appeared as a judgment day for Shahid Afridi when he became visible before disciplinary committee. For breaching various clauses of contract with PCB and for misconduct Afridi is fined Rs. 4.5 million but he did not apologize for his conduct.

Before going to the hearing, Afridi spoke to the media in which he said he would not apologize for his actions but he admitted that he did make a mistake by breaching the clauses of the central contract. He said that he will explain the circumstances to the committee under which he did that.

The PCB on the recommendations of the disciplinary committee issued Afridi the NOC only to play for the Hampshire county’s T20 tournament but he will not be able to play anywhere else without the PCB’s permission.