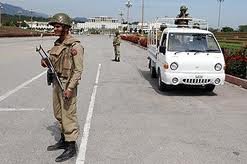 Capital security put on high alert after suicide bombing in Islamabad in which a private security guard was killed and several other sustained injuries.

Strict security measures have been taken in Federal Capital after suicide attack on Monday. Security has been tightened on exit and entry points of Federal capital besides commercial areas to deal with any eventuality. In addition special commandos and plainclothes police officials have also deployed in and around sensitive places.

Two blasts in two days have once again given rise to fears. Special guidelines have also been issued for those officials that were deployed on pickets and asked them to keep vigilant eye.