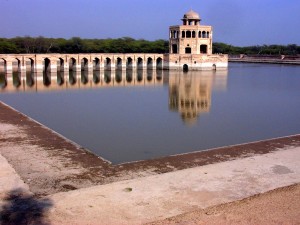 Hiran Minar is an interesting and a popular tourist attraction as it has several historical sites. It is lamentable that the authorities had not preserved the sites including the Hiran Minar. During the reign of Emperor Salim from 1605 to 1627, Sheikhupura had the status of a royal hunting ground. Mughal Emperor Jahangir ordered to build a tower and a grave for his deer, Mansraj, in Sheikhupura.
He hunted in the area where Hiran Minar was later built with his friends and spotted a deer he tried to kill, but accidentally killed his own favourite, Mansraj. The emperor became so sad that he ordered to bury the deer in the ground where it died and also build a tower called Hiran Minar.

Visitors to the 17th Century “Emperor Jehangir’s hunting resort” – popularly known as “Hiran Minar” – have complained of lack of facilities. With only one and a half hour from Lahore, this monument in the outskirts of Sheikhupura has always drawn a crowd of picnickers, especially during spring and winter.

On Sundays and public holidays, families from nearby areas and towns come to the resort for recreation. But lack of quality food and public toilets has posed problems for the regular visitors, especially women and children. From a shabby looking battered tin cabin one gets overly priced foodstuff – a highly discouraging factor for tourism. The toilets include a “roofless” structure stinking with a foul smell due to choked filth that turns away the visitors. 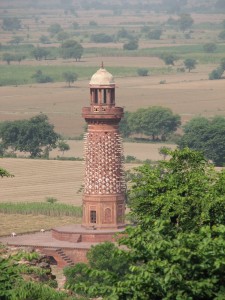 Some 40 odd kilometres west of Lahore and past the city of Sheikhupura amid lush green countryside stands the historical Hiran Minar flanked by a water pool and a baradari. This was the hunting site where Prince Saleem, later to become Emperor Jahangir, came for shikar. The city of Sheikhupura was named after the prince by his father Akbar who addressed him as Sheikhu. Details appearing in the Tuzuk-Jahangiri say that on March 31, 1607, an antelope was caught alive here by Jahangir’s entourage. When brought before the emperor, the animal showed instant affection, seating itself down at Jahangir’s feet, as if pleading to be spared and adopted. Jahangir liked the gesture, and naming it Mansraj, also issued a royal decree banning the shikar of deer at the hunting site.

When Mansraj finally died of old age in 1620, a minaret was ordered to be built at his grave, hence the name Hiran Minar. Measuring 110 feet in height, as it stands today after the collapse of its canopy on the top, 108 steps on a spiral staircase lead to the summit of the minaret where rest the remains of Mansraj. The cost incurred in those times on the construction of the minaret was Rs150, 000. Later, in 1634, when Emperor Shahjahan stayed at his father’s favourite hunting site for three days, he ordered the construction of a baradari surrounded by a water pool. It was built in the classical Safavid Isfahan style, and the pool measures 890 by 750 feet. Water for the pool was arranged to be provided by a canal, linking Hiran Minar with River Chenab that flowed several miles further west of the site. Dried up, old water channels line the western sides of the monument, while a stream coming in from the opposite direction now fills the pool.

The baradari located in the middle of the pool and connected with the minaret through a passageway is reminiscent of the several octagonal tomb structures dating back to the period of Shahjahan and found in and around Lahore. While the wall paintings have long perished from inside the structure, a few faded frescos still remain on the ceiling of the main building. Winding spiral steps lead down to the boat bays located at the water level at the base of the baradari.

A thick keekar-jungle flanks the northern side of the pool, with winding footpaths zigzagging their way over the raised mounds. On the opposite side of the pool a tree-lined garden, with a canteen and some swings and slides await picnickers, but few are tempted to come here. The reason: a total lack of promotion of the retreat by the Punjab tourism department.